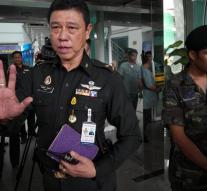 bangkok - Nobody has claimed responsibility for the bomb that exploded Monday morning in a hospital in the Thai capital Bangkok. At the explosion, just three years after the army was taken to grips, 24 people were injured.

The bomb ended at a waiting room at Phramongkutklao Hospital near the Victory Monument, where patients were waiting for their medication. The hospital is from the army, but citizens are also treated.

Most injured were hit by flying glass windows of windows that fell. One woman had splinters deep in her jaw and was under the knife.

The bomb would be hidden at the entrance of the room. 'He was made with the intention of killing people because he contained a lot of nails,' said Army Chalermchai Sittisart on Thai television.

It is not yet clear who is behind, but the suspicion is on political opponents of the military regime or Muslim separatists from the far south of the predominantly Buddhist country.

The explosive resembles a bomb last week for the National Theater in the historic center. Soldiers in both uniform and civilians have been deployed to increase security in the city.

In August last year, the popular seaside resorts of Hua Hin and Phuket were hit by deadly explosions. These attacks have never been clarified.

In 2014, the Thai army seized power to put an end to massive street protests. The elected ex-premier Yingluck Shinawatra had to clear the field. She called on her Facebook page to a quick return to democracy yesterday.