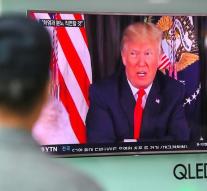 seoul - South Korea, along with the American Air Force, has held an exercise over the Korean peninsula. During the exercises two supersonic B1B bombers and four F35B fighter jets were involved. The exercise comes two days after North Korea fired a rocket flying over Japan. The tension in the region has therefore increased again.

The exercises were part of large-scale joint military maneuvers that hold the US and South Korea annually. North Korea is strongly opposed to these exercises, the country is already seeing preparations for an invasion.

President Trump made a strong return to North Korea this week. 'Talking is not the answer,' said Trump. US Secretary of State Jim Mattis (Defense) stressed later that he could not find a diplomatic solution to the conflict.