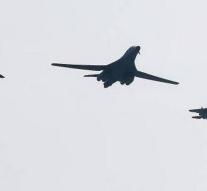 The exercise with the aircraft flying from Guam is a response to the North Korean arms program. The country performed several (failed) tests with ballistic missiles in recent weeks.

North Korea talks about a reckless military provocation. The United States would put the countries 'on the verge of war. '

Also, the missile defense system (THAAD) that the Americans have stationed in South Korea to defend the country against enemy projectiles has been operational since Monday.