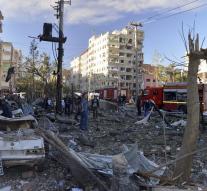 diyarbakir - In an explosion in the predominantly Kurdish city of Diyarbakir in southeastern Turkey on Friday killing one and certainly fallen thirty wounded, NTV reported. The explosion was caused by a car bomb.

Eyewitnesses reported that the explosion occurred near the police headquarters.

The explosion followed the arrest of eleven MPs, including the two chairmen of the pro-Kurdish Democraische People's Party (HDP). The government of President Erdogan considers the HDP as an extension of the outlawed Kurdistan Workers' Party PKK.