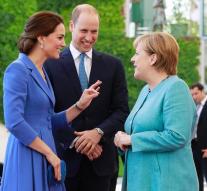 heidelberg - An American airplane bomb from World War II caused consternation on Wednesday in Heidelberg, just before royal visit from Britain. Prince William and Duke Kate do the city on Thursday in the course of their Germany trip. Less than 24 hours before their arrival, construction workers found work near the station a blindpasser.

Experts from the explosive cleanup department managed to remove the 500 pound ignition in the eve. In advance, the area was cleared around 300 meters in a 300 meter radius. 2300 people had to leave their homes.

The children of two kindergartens were also taken care of and the train traffic stopped for some time.