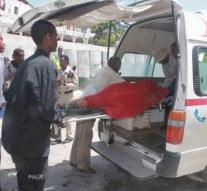 - At a large explosion in the Somali capital Mogadishu on Sunday, at least three people were killed and seven people injured. After the explosion were heard shots, the BBC reports.

The police think the death toll may rise further. The explosion took place near the port of Mogadishu. Possibly someone blew himself up in a car.