Home / World / Bomb belt of terrorist Abdeslam did not work 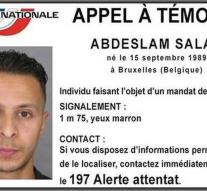 paris - The bombguard of the only surviving terrorist of the attacks in Paris, Salah Abdeslam, refused on the fatal evening service. Abdeslam, like the other terrorists, had to die on 13 November 2015, according to research by the French police.

Researchers have long wondered whether the tenth man of the command that killed 130 people had conceived at the last minute. He left his bomb belt in a trash can in Paris.

The bomb belt consisted of two compartments filled with explosives. A battery and a push button were missing, but according to the police the belt would not have been functional with battery and button, reports the radio station France Inter.

In the 2015 attacks, three perpetrators blew up at the Stade de France football stadium. The other terrorists shot at cafes and started a bloodbath in the Bataclan concert hall, where 89 people died.

Abdeslam was fugitive for a long time, but was detained in the Brussels district of Molenbeek in March 2016. He is still in Belgium.