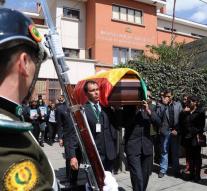 - The authorities in Bolivia have three leaders of the miners' union Friday indicted for the violent death of the Minister of the Interior a day earlier. The three is the president of the union, Carlos Mamani. Which is by the Bolivian public prosecutor charged with murder.

The Minister Rodolfo Illanes was abducted by striking miners who had beaten him after death. The government holds the union leaders responsible.

The miners went on strike for safer working conditions and higher wages. The Deputy Minister was negotiating with the striking miners, but it had to pay with his life. In a confrontation after two miners were shot between the strikers and the police and arrested hundreds of people.