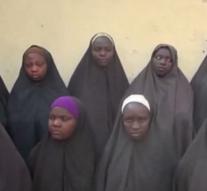 abuja - Boko Haram wants the large group of schoolgirls exchanging the terrorist group kidnapped two years ago, with the Nigerian government for its own fighters imprisoned. A video which put the Islamist militants Sunday on the Internet to see some fifty girls. They are wearing headscarves behind a man with a machine gun.

Sunday published video is the third showing the girls since their abduction. The militant targets the parents of the victims.,, They should put pressure on the government to release our members, so we can let the girls. ' The Nigerian government has already announced,, to be in contact '' with the militants.


The Minister of Information is the government,, on top. ',, But we are very careful, because the situation is complicated by the split in the leadership of Boko Haram. We must also ensure the safety of the girls, '' he said. Within Boko Haram raging infighting. One of the factions himself recently stated to,, only real department of Islamic State ''. The abducted girls are in the hands of the rival group.

Boko Haram would hold still 219 girls of the 276 who were abducted from their school in April 2014. Some escaped, been married forty girls. According to the man in the video are also casualties in bombing by the Nigerian Air Force.

late Boko Haram see dead bodies at the end of the video. The army denied Sunday that they are victims of air strikes.


The mass abduction called two years ago dismay worldwide, followed by the action 'Bring Back Our Girls'. Among others, the wife of US President, Michelle Obama, and human rights activist Malala Yousafzai strive at.