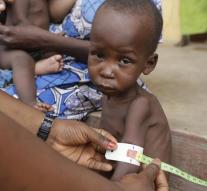 lagos - The army of Nigeria at the weekend along with local militias over 5,000 people released that were held hostage by the Islamist terrorist group Boko Haram. During the raids in fifteen villages six terrorists were slain in the northeast of the country, the military said Sunday.

The news of the liberation could not be verified because of the remoteness of the area where the military operation took place.

During the uprising by Boko Haram in Nigeria and the neighboring countries of Chad, Niger and Cameroon more than 15 000 people slain and two million displaced. The jihadist group that swore allegiance to Islamic State last year, continues to commit regular terror attacks at crowded places like mosques and markets.