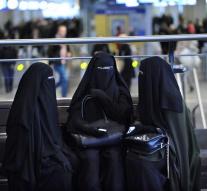 strasbourg - The boerkaverbod which is in force in Belgium does not conflict with the human rights treaty. That has been judged by the European Court of Human Rights on Tuesday. It has been forbidden in Belgium since 2011 to cover the face (partially) in public places.

Two women were fined because they carried a boerka in Brussels. The highest Belgian judge rejected their defenses, after which they went to Strasbourg in Strasbourg. That also assessed the request of a Muslim to destroy the ban in three Belgian municipalities.

The arguments put forward- right to privacy, religious freedom and expression and discrimination- were rejected.

The court ruled three years ago that the French ban on the public wearing of a boerka or nikab could by the bracket. Total face coverage is contrary to open democratic society because the face plays an important role in social interaction, according to the judges.