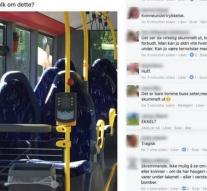 - Extreme right-wing Norwegians have apparently difficulty finding the difference between buschairs and women hollowed in farms. In a Norwegian Facebook group Fedrelandet most importantly (Vaderland first, ed.) Was posted a picture of an empty bus with chairs asking, 'What do people think about this?'. The group members thought they saw a group of farmers women.

People responded to the post with descriptions as 'frightening', 'tragic' and 'scary'. People also wondered whether the non-existing passengers carry 'weapons and bombs', according to Norwegian The Local.

'It looks very scary. This should be banned. It can be terrorists with weapons, 'said a member of the Facebook group. 'I thought this would be the year 2050, but it's happening now,' writes another member.

The responses went viral when Facebook user Sindre Beyer collected screenshots and put online. 'What happens when a picture of empty buschairs is placed in a horrific Facebook group and everyone sees a group of farms,' ​​he added to his Facebook post that was widely shared.

Beyer told the Norwegian news newspaper that he has been following the group, with some 13,000 users. 'I'm shocked how much hate and fake news is being spread. The empty buschairs show how prejudices can win wisdom. That's why I shared this post so that more people can see what's happening in the dark corners of the internet. '