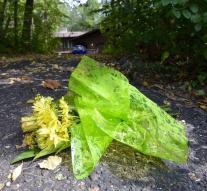 - A controversial loss in America is dissolved after 27 years. The remains of an eleven year old boy, Jacob Wetterling, has been found. Someone had told police where the body lay.

The boy disappeared in October 1989, when he rode with his brother and a friend near his home in the state of Minnesota. A masked and armed man took him. He remained without a trace and no one was arrested. Last year the police reopened the investigation. They found a man who had already been in the picture and had molested other boys in the neighborhood. He led police to the grave of the boy.

Jacob's mother Patty told a local station:,, Jacob is found, our hearts are broken. We have no words for it. ''

The disappearance of the boy shocked America. In 1994, the US Congress took the Jacob Wetterling Act, which states are obliged to keep lists of sex offenders.