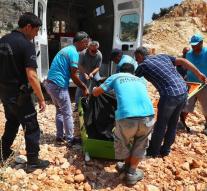 haaksbergen - The body of Joey Hoffmann is being repatriated to The Netherlands today. That reports Turkish media.

The Haaksbergenaar parents, missing for more than a month, have recently traveled to Turkey to identify the physical surplus of their son. They also left DNA material. The trip was funded by the municipality of Haaksbergen.

The 'Joey Hoffmann' case ruled this summer for the news because, at one point, all three Dutch people were identified as missing. Joey had traveled to Turkey with Bjorn and Derya to help this house build a house. After both parties got argue, Joey would have gone his own way after which he died.

The final result of the exact cause of death is expected within a few weeks.