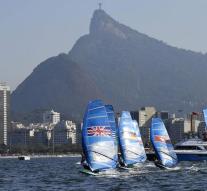 - A gruesome discovery in the Guanabara Bay in Rio de Janeiro. Near the place where the Olympic sailors into action on Sunday found a bone.

Residents of Governador, an island in the bay belonging to the city of Rio de Janeiro, saw the body lying in the water. It involves the entire leg of a man, reports Daily Mail. To the lower leg 'Kauan' tattooed.

However, the probability that the identity of the man is obsolete is quite small. 'It is probably someone who is murdered by a drug gang, his body was dumped in one of the rivers that flow into the bay,' said a source in the police.


Even before the Olympics began, the Olympic sailors had criticized the quality of the water in the bay, as did the training between the plastic bags and other rubbish. Images of the contaminated water were shared widely.

The police are, moreover, have found more body parts in the bay. Last month, children playing found the lower body of a woman in a plastic bag which was washed ashore near a favela.