Home / World / Body Dalí will be excavated on July 20th 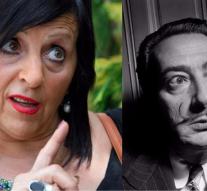 figure - The bald body of the Spanish painter Salvador Dalí (1904-1989) will be excavated on Thursday, July 20th. That ruled a court in Madrid on Thursday, the city council in Figueres told several Spanish media. Dalí is buried in his theater and museum in the Catalan town.

A Spanish woman successfully spends a business to excavate the surrealist painter. Pilar Abel believes she is the daughter of the painter who died in 1989 at the age of 84. Since 2007, the woman has been fighting for recognition of Dalí's fatherhood and wants to prove it through DNA research. Abel's mother would have had a covert relationship with the painter in the fifties.

Dalí is especially famous for his paintings 'The Perseverance of the Remembrance' (with liquid watches) and 'Swans reflecting elephants'.