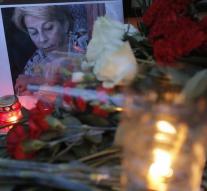 sochi - In the Black Sea in Sochi are the first bodies of the victims of the air crash of a Russian military plane salvaged. Among the dead are many members of the world famous Alexandrov Ensemble, the choir of the Russian army.

None of the 92 passengers, including 64 members of the orchestra, survived the accident. The plane, a Tupolev 154, disappeared two minutes after taking off the radar. With ships, drones and divers searched for victims. President Putin has announced a day of national mourning. There will be an extensive investigation into the crash. The authorities do not rule out a terrorist attack.

Among the passengers was in Russia very famous doctor Yelizaveta Glinka. 'Dr Liza, 'as it is called in Russia, was the head of a Russian charity. She was heading to Syria to deliver a consignment medicine at a hospital.

The unit was also the conductor of the Russian army choir, Valery Khalilov. At the home of the orchestra in Moscow were laid flowers and lit candles.