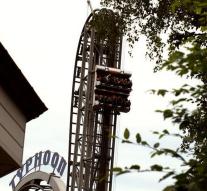 'Two people were taken to the hospital with the ambulance. They had neck pain. The three others did not have to go to the hospital. They eventually stayed in the park, 'said Bobbejaanland spokeswoman Peggy Verelst against HLN.

According to her, the injuries are included. The two visitors to the hospital reportedly returned to the amusement park after their hospital visit.

SEE ALSO: Dead and injured in case of crash accident US

It is not clear how the accident happened, the investigation is still ongoing. The attraction has been shut down since the accident. 'Of course, this should not happen. The cause is almost known. After that it will have to be reviewed again. We hope to reopen this weekend. '