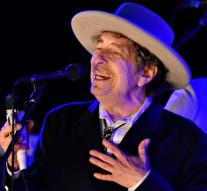 stockholm - Singer Bob Dylan is behaving rude and arrogant, do not give any response to the announcement that he won the Nobel Prize for Literature. Having a member of the Swedish Nobel Committee said in an interview with the Swedish channel SVT.

The Swedish writer Per Wästberg voiced sharp criticism of Dylan's refusal to introduce themselves formally informed that he has won the prestigious award. 'He seems a very grumpy and stubborn man,' Wästberg said.

The only sign that showed that the American singer was aware, showed again a now deleted message on his website.

The Nobel Committee has earlier this week indicated no effort to do more towards the taciturn Dylan. Wästberg: 'We wait. Whether he shows up (at the awards ceremony on December 10) and then he will be welcomed. If he does not turn up and we'll come up with something else during the banquet. Anyway, he is the winner. '