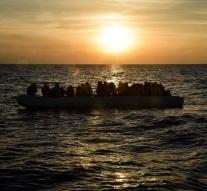 nicosia - Two boats with a total of 305 Syrian refugees on board arrived in Cyprus on Sunday on Saturday. The vessels are probably from the Turkish town of Mersin.

One of the ships reached the shore just in time. He made water, so the police handed in Cyprus. According to the authorities, the second largest group of refugees ever reached the island. In 2014, 345 people arrived in Cyprus.

The patrons of the vessels who completed the trip this time, including many children, are in good health.