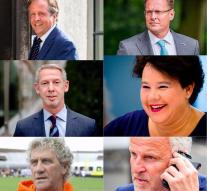 hilversum - Thousands (renowned) The Dutch, according to the Radio1 research program Argos and website OneWorld, are on a blacklist that banks use to report unusual transactions, money laundering and terrorist financing.

The composition of that list, which is also used by the Dutch banks, does not apply to government control. The data is outdated, incorrect or based on dubious sources, according to Argos and OneWorld. The NPO Radio1 program devoted a broadcast on Saturday afternoon to the list of the World-Check company with over 2 million names worldwide.

According to Argos, it is striking that there are many names of (former) politicians and their relatives who are regarded as so-called PEPs (politically exposed persons). The purpose of the registration is the prevention of corruption and the barring of money. Those lists also contain names of criminals and terrorists in other categories.

According to Argos, the names of the princesses Amalia, Ariane and Alexia, the mother of Prime Minister Mark Rutte, of State Secretary Sharon Dijksma and her family members, the group leader Alexander Pechtold (D66), Peter R. Vries (as a Member of the Candidate Chamber in 2005) and Albert Verlinde, through his former relationship with Mayor Onno Hoes of Maastricht. Also in Belgium there are countless well-known and less well-known Belgians on the list, says De Tijd. Names like Marc Dutroux, Guy Verhofstadt and Jean-Marie Pfaff are on the list of 16,000 names.

The use of such names lists is confirmed by the Dutch Association of Banks (NVB). However, she argues that it is a blacklist. According to a spokesman, it is a legal obligation to monitor unusual transactions of people registered as PEP. 'There is absolutely no obstacle to banking for them. '

Banks do not keep that registration themselves, but spend it on commercial parties. The largest of those commercial service providers, according to researchers World-Check, owned by media company Thomson-Reuters.

Yvonne Willemsen, head of security affairs of the NVB, said in the Argos broadcast not to be in favor of such outsourcing. 'Creating these types of lists is really a government task,' she says. 'The moment you get an obligation to identify people, you think I should be the government to tell who it is. '