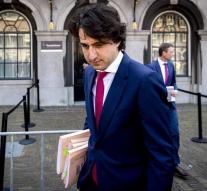 hilversum - BNNVARA has decided to transfer its part of the copyright of the documentary Jesse to the producer. The broadcaster reports that the transfer occurs 'in return for an amount of the original BNNVARA contribution.'

The manufacturer and maker can now decide what's happening to the material. Film producer Doxy, producer of producer Janneke Dolaard, wants to publish the film in several cinemas and 'distribute it further so that the audience is able to see the film in the short term. '