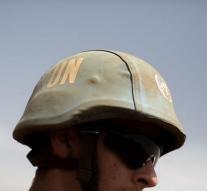 bamako - Definitely a blue helmet on Sunday arrived in Mali killed when an explosive device blew up at a UN vehicle. Several soldiers of the peacekeeping force were wounded, told UN mission Minusma.

The explosion took place in the Kidal region in the northeast of the African country. The nationality of the victims was not disclosed. In the incident are likely to be involved not Dutch soldiers, informed the Ministry of Defence in The Hague.

The vehicle with the blue helmets would be a driven mine or improvised explosive device. Some time later, according to the UN mission again off an explosive at a UN vehicle in the area. While no one was injured.