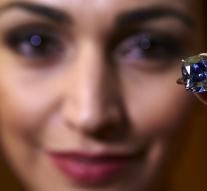 geneve - A spectacular blue diamond was auctioned off Wednesday in Geneva for the record amount of 48.6 million Swiss francs (45 million euros). The 12.03 carat 'Blue Moon' from a South African mine was the showpiece of the jewelry auction this year at Sotheby's. The new owner is a private collector from Hong Kong, said the auction house.

According to Sotheby's, the Blue Moon brought the highest price per carat, which yet for such gemstone is paid. Net price, excluding the premium for the auction amounted to 43.2 million Swiss francs.

The rare stone is made of a rough diamond of 29.62 carats, which was discovered in South Africa in January 2014. The stone was treated for six months and polished in New York.

Tuesday was already a record amount counted down for a pink diamond. It brought at Christie's auction in Geneva converted 26.6 million euros. The stone of 16.08 carats was bought by an anonymous bidder remained.