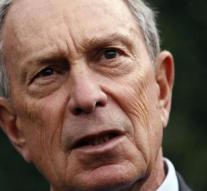 washington - US billionaire Michael Bloomberg has made another $ 64 million (54 million) available for environmental protection. The former Mayor of New York, in response to the decision of the Trump government, began the launch of Barack Obama's climate program.

Scott Pruitt, the head of the EPA national environmental agency, announced Tuesday the launch of the Clean Power Plan, aimed at drastically reducing carbon dioxide emissions by, among other things, coal-fired power plants. Pruitt, who, as President Trump does not believe in climate change through human affairs, declared 'the war on coal'.

Bloomberg said Wednesday that the fight against coal is the responsibility of many distressed Americans who no longer want to be poisoned by fossil fuel combustion. Washington believes he can not end this fight.

Bloomberg has already spent about 100 million on the right thing. He is a generous sponsor of the Sierra Club, the oldest and largest environmental protection organization in the US.