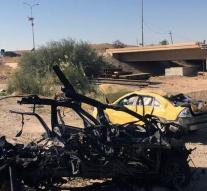 erbil - Two suicide bombers have in a village near the Iraqi city of Tikrit caused a massacre at a wedding party. They blew themselves up among the partygoers and certainly killed 23 of them. This was announced by the local authorities Wednesday. subsequently by more than thirty killed victims. There are several cases still injured.

Responsibility for the attack in Hajjaj has not yet been claimed. Islamic State was the last time in front of similar terrorist attacks in retaliation for the land loss include Mosul.