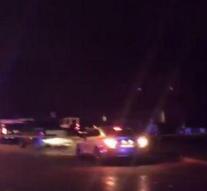 plano - A shotgun in Plano, Texas, killed seven people and injured two people. The suspected shooter was shot by the police.

When agents approached the house after a report they heard shots. Once in the house an agent shot the suspect dead. Inside, they found nine victims: seven dead and two injured.

One witness heard during the shooting incident between thirty-four shots. Apparently all victims are adults. The trigger of the shooting is being investigated.