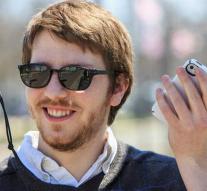 washington - What do you do if you want to drive, but you can not see the road at all? A car is not an option at the moment. But that can change. Because if the car drives independently, the blind could also be behind the wheel.

The American organization for the blind and partially sighted is conducting a campaign. The federal government wants politics to provide rules that allow the blind to drive self-propelled cars. For example, states like Florida, Michigan, and New York have ruled that only drivers with a valid driver's license may drive a self-propelled car. There should be an eye test. The blind therefore feel locked out.

The League also wants the government to stimulate the advent of autonomous systems. Designers and builders, in turn, should take into account the visually impaired, a group they have not had to think so far.

'' If the systems are well designed, when the vehicles are accessible, it makes for a better travel opportunity that does not exist now, 'says Anil Lewis of the National Federation of the Blind against Bloomberg Press Office.

The American Blind Association works in the campaign with organizations for deaf and elderly, with car makers like Ford, Volvo and taxi apps Uber and Lyft and Google daughter Waymo, who work on the development of self-propelled cars.