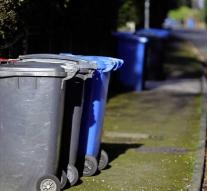 manchester - The police in Great Britain have their hands full of young people who are engaged in a new, bizarre and 'extremely dangerous' trend. The police around Manchester has several...

The paint used to fabricate the bins would cause a 'buzz' when burned. The police now warn that these vapors are extremely harmful to human health.

Various institutions have stated that inhaling the vapors is more harmful than glueing or gas.

A spokesperson for the police says that children's playgrounds have also suffered great damage due to this new way of pastime. 'This destruction has major consequences for the community. '