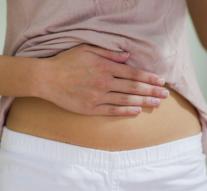 chandauli - The Indian Neha Begum (22) from Chandauli weeks had suffered from severe abdominal pain. The doctors she visited, sent her repeatedly with painkillers home. It did not help and she kept writhing in pain. When she eventually ended up in the hospital, she came to a bizarre discovery.

The doctors of the KG Nanda Hospital discovered a blockage in Neha's intestines. What doctors encountered during the operation, they had never seen. In the belly of Neha Begum they found 150 live worms of about 25 centimeters long. Reported that the British newspaper Metro.

Dr Anand Prakash Tiwari, who was somewhat accustomed to, was totally in shock. 'We have a three times earthworms found in the abdomen of a patient. But it is the first time that we encounter such a large amount. '