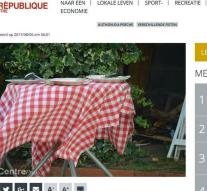 authon - The mystery of the two dead men in the backyard of their house in France has finally been solved. And it's a bizarre story.

It began when a woman from Authon-du-Perche found 38-year-old Olivier Boudin and 69-year-old Lucien Perot in a strange attitude in their garden.

The one lay on his back and the other just sat at the table with half a glass of wine and a baguette with camembert on a plate.

First, she still thought that the gentlemen were sleeping after the night after a barbecue. When she did not help shaking, she alarmed the police.

They did not find traces of violence or prove that there would be a fight or something like that. Residents speculated that the two would have been killed by food poisoning.

Autopsy now gives the liberating answer a week later. The 69-year-old and well-drunk Lucien turns out to be stitched in a bone of 44 grams. According to the jailer, the younger friend was so panic that he died of a heart attack. Olivier suffered from a genetic heart failure.