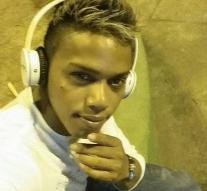 - The 24 -year-old man Sunday night bite a passenger on board a flight from Aer Lingus and then died , had cocaine worth $ 60 000 in his body.

In an autopsy on the body of John Kennedy dos Santos Gurjão 80 balls with a total of 800 grams of cocaine were found in his stomach, reports the Mirror.

One of the pellets was during the flight from Lisbon to Dublin opened, allowing the Brazilian as other passengers became extremely violent. He bit another passenger after the pilot was forced to make a stopover in Cork.

The man was already deceased. Relatives of the man placed an obituary on Facebook.