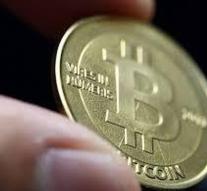 - The digital coin Bitcoin went for the first time through the $ 4000 limit. While more and more so-called crypto coins are on the market, the Bitcoin has been quadrupled since the beginning of this year.

Since this year, $ 1.3 billion of money has flowed into Bitcoins.

By comparison, the best performing equity fund in the AEX, AkzoNobel, rose by 30% since the beginning of this year, while the main index won 7% value.

The almost ten-year-old Bitcoin, traded on the mobile network blockchain where all unique transactions are recorded, is very mobile. Unlike the euro or dollar, there is no state control or issue by a central bank.

Last week, the Bitcoin was split, with the Bitcoincash as the second currency. At the same time, innovations were implemented which accelerated the tradability of the crypto coins online.

The 'old' Bitcoin was increasingly traded by the network's constraint. In early August, the Bitcoin crossed the $ 3000 limit.