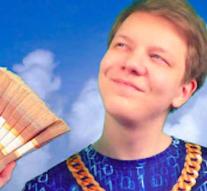 amsterdam - A bitcoin blogger who spoke a little too much about his successes was robbed, deprived and later found dead.

The Russian Pavel Nyashin had a popular blog and vlog on YouTube about making money with crypto coins. He liked to show the huge stacks of money that he would have earned by trading in digital coins. On one of the videos, he gave his address in St. Petersburg, and he should not have done that.

It did not take long before a couple of robbers came to visit him at home January. The robbers dressed as Santa got around 320,000 euros in cash from his safe. Pavel was also severely abused.

Nyashin became depresive after the robbery and retreated further and eventually went to live with his mother. His vlog was also no longer updated.