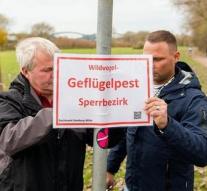 oldenburg - The outbreak of bird flu in the German state of Lower Saxony seems under control. From test results it has been found that the disease has not spread. This was announced by the responsible authorities Monday in Oldenburg.

Last week, it was discovered the contamination on poultry fattening in Cloppenburg district. It turned out to be the dreaded Influenza A virus subtype H5N8 variant virus. All animals were culled, including two neighboring farms. A total of 108. 000 turkeys were culled. Although no new cases have been reported, continues practically throughout Lower Saxony an indoor confinement effect.

In the Netherlands Friday bird flu was found at a meat company income in Biddinghuizen.