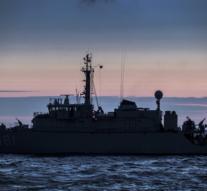 - Belgium and the Netherlands will purchase together for four billion four frigates and twelve minesweepers. The defense ministers sign agreements on this end of this month, Belgian media report Monday. They rely on sources in the Defence in Brussels.

According to the Dutch Ministry of Defence, it is a preliminary first estimate both the amount and the number of ships. 'But it is quite obvious to replace jointly go,' said a spokesman. The Dutch ships in the period 2020-2024 to replace.

Belgium now has maintained the Dutch mine hunters and will oversee the purchase of these vessels. Netherlands would take the lead in the frigates. The Belgian and Dutch marines have been working together for years, but such a large investment they have not done before.

In September, said the new admiral of the Belgian navy, Wim Robberecht that Belgium and the Netherlands would buy two frigates worth 1 billion euros.