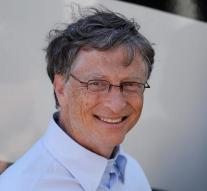 - Bill Gates from Microsoft nowadays uses an Android phone. This was shown by an interview with Fox News Sunday. The co-founder of Microsoft used a Windows Phone in the past, but has now switched to a phone with Google's operating system operating system.

About a year ago, Microsoft announced that Windows Phone had been discontinued. The exact model phone that Gates has not been confessed. Well, he said he had a lot of Microsoft software on his phone. It may be a special Microsoft edition of the Samsung Galaxy S8, which comes with a wide range of Microsoft apps.

Gates apparently has no interest in an iPhone. In the past, iPhones and iPods were banned in Gates' house. Well, he called Steve Jobs, co-founder of Apple, in the interview a genius.