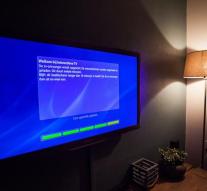 haarlem - The great failure on the network of telecom provider KPN early September, the most affected people in 2016, according to figures from website Allestoringen.nl. The failure on Saturday, September 3rd was reported more than 160,000 times. The problems on the network could for example not be pinned in many stores.

WhatsApp takes a substantial failure on 19 May, the second in the annual and Pokémon Go was a newcomer good for third place. The day of the launch of the game in the Netherlands had developer Niantic major problems to let people log in. That yield many reports on July 16 and a third on the year list. A day later, the problems were not solved. The reports of the day ensure that Pokemon Go with a sixth place once again in the top ten.

Playstation Network, Vodafone, Netflix, game company Electronic Arts, Ziggo and ING also took a place in the top 10. The latter is a major change, because where banks a few years ago dominated the list, they have according to co-founder Tom Sanders all Faults. nl now 'reasonably leak upstairs.'

Usually the summer is a quieter time, Sanders says. 'But this year broke Pokémon it. No one could have predicted that it would become so popular.'

Total registered website 5403 disturbances in 336 Dutch service. In 693 cases involved a major failure, which is a failure in which at least ten times as many reports coming in as a normal day. All faults together provided the site 11.7 million reported at about the same as last year.