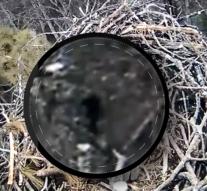 - Some people are convinced that to see the mythical creature Bigfoot is footage of a live feed from a nest with eaglets in a forest in the US state of Michigan.

The images show how a dark figure walking among the litter on two legs. The video has been recorded in May, but recently newfound Carbon Media Group, which installed the camera, that there was to see something remarkable.

Jeff Meldrum, a real professor of Idaho State University who does research on the legend of the monkey man tells the Detroit Free Press to find the pictures interesting, but he sees no evidence for the existence of Bigfoot.