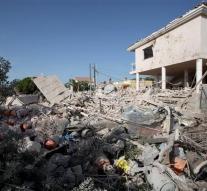 amsterdam - According to an anonymous intelligence source in The New York Times, the Spanish police assume that an unintended explosion in a house in Alcanar on Wednesday night has triggered the course of terrorist attacks.

The house was found to be filled with gas bottles and also with other materials suitable for explosives. At that explosion a person came to life, possibly the bomber.

The terrorists would have tried to rent three lorries with the stolen identity papers of the arrested Moroccan Driss Oubakir. But because they did not have the correct driver's license, they rented three smaller buses. One of these was used in the attack on the Ramblas and another would be found empty.

The police started a hunt for the third bus in the whole of Catalonia on parking places and in garages, possibly used in the unsuccessful terrorist action in Cambrills.