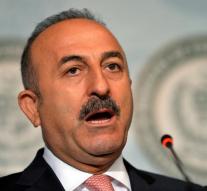 ankara - The European Union (EU) makes serious mistakes in his response to the failed coup in Turkey. And if the West losing Turkey,, 'is due to his own mistakes and not to the good relations of Ankara with Russia, China or the Islamic world. That said, the Turkish Foreign Minister Mevlut Cavusoglu Wednesday.

In an interview with state news agency Anadolu said the minister also was not intended recent Turkish rapprochement with Russia as a message to the West. But the support for EU membership of Turkey has decreased according to him by the population due to the sympathetic attitude of the block to those who carried out the coup attempt on July 15.