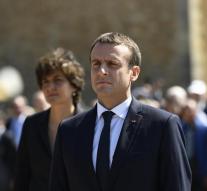 paris - French President Emmanuel Macron can work with the very majority of his party in parliament to make the reforms he promised. According to estimates from two survey agencies, Macrons party La République and Marche (LREM) and her ally Modem reach between 355 and 360 of the 577 seats in the National Assembly.

The main opposition party becomes Le Républicains, which reaches its allies at 125 to 133 seats. The upcoming Pari Socialist until last month is basking in between 45 and 49 seats, the Front National does not go beyond 6 to 8.