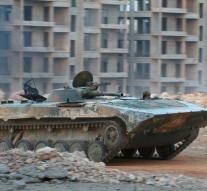 - Syrian government forces have launched a massive attack on the thoroughly bombed districts of Aleppo which are held by the rebels. They opened the attack Tuesday on four fronts, reported a senior rebel.

The ground offensive is the largest in recent months. The army turned the rebels in Aleppo last week, after the breakdown of the ceasefire, again the thumbscrews. The army wants to drive them out once and for all from the ruined metropolis.

According to an Iraqi militia commander who fought on the side of the Syrian government, an elite unit draws in Aleppo tanks and armored vehicles together. The Nimr, as the elite corps called, would lead the new campaign against rebels in Aleppo.