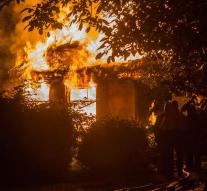 naarden - In two nights at Naardermeer in Naarden, a big fire was raging on Friday night. The fire brigade was extinguished at 03.00 with large material because there was a fire in a house with a thatched roof, probably due to lightning strikes. Also in a second home, a fire broke out.

The fire department has made it possible for a single resident who can still stay on the upper floor to put safety. All residents are in safety. Some have been checked by ambulance staff according to the fire department. One emergency worker has been hospitalized.

At 5 o'clock the signal was burned. The fire brigade burns one of the two homes out of control and considers the other property to be lost as well.