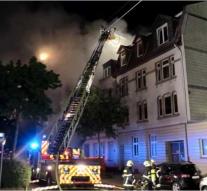 wuppertal - Due to an explosion and subsequent fire in a home in the German Wuppertal, 24 people were injured, four of them heavy. The cause of the explosion in the night from Saturday to Sunday is not known.

A fire broke out on several floors in the house. The fire brigade had to liberate people with ladders from upper floors that could no longer get away. It was not clear early Sunday morning if there were people in the building and if there were missing people.