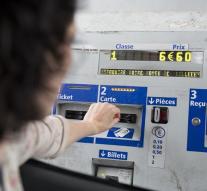 - Vacationers this summer driving through France, faced with widely varying tolls on motorways. To the north is the levy on the highway than in the south and the toll per kilometer ranges from less than 3 to 53 cents, the French newspaper Le Figaro reported.

The most expensive is the A14 autoroute. Which runs from the La Défense business district west of Paris on the western edge. On the 20-kilometer highway that reaches to Orgeval A13, the price during peak hours, every kilometer 53 cents. Outside the busy times reduces the toll to around 33 cents per kilometer.