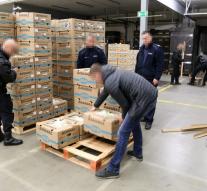 warsaw - The Polish police have 178 kilos of cocaine found in a batch of bananas from South America. The drugs from Colombia have a street value of the equivalent of 25 million euros. It is one of the biggest drug seizures ever in Poland, said a police spokesman.

The party was charged in a Belgian port into a truck and transported to Poland. The forty driver of the truck was arrested. It is not yet clear whether the cocaine was intended for the Polish market or further would be smuggled to another country.