Home / World / Big blow for IS 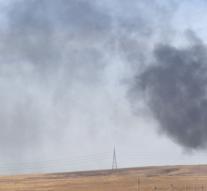 - With a large airstrike, the coalition against IS fighting the oil trade of the extremists delivered a sharp blow. The coalition led by the USA reported Friday that 168 tanks were destroyed, the highest number so far.

Warplanes attacked the oil trucks in the neighborhood of the Syrian Palmyra. With this kind of airstrikes the coalition hopes to hit the extremist group financially. IS a lot of money by trading oil in recent years.

Initially, the US tactic was mainly to bomb oil fields. Now the whole production chain is under fire, from refineries to storage to transportation, explained a senior official of the US State Department Friday off.

The oil in IS area is relatively easy to pump, he says. 'You need to be there for a genius. 'But if the existing infrastructure is destroyed, goes IS according to him, in terms of level' back to the seventeenth or eighteenth century. '