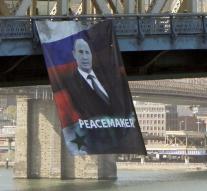 - There Thursday suddenly hung a giant banner of Russian President Vladimir Putin at the edge of the Manhattan Bridge in New York. Police are looking for those responsible for the remarkable action.

The banner of 6 to 9 meters appeared at the railing of the bridge with a picture of Putin in uniform against the backdrop of the Russian flag. Below the banner was in big letters 'peacemaker'.

The New York police received an afternoon call on the banner and removed it an hour later. A police spokesman said the investigation into the who and why is busy and that no further information is known.