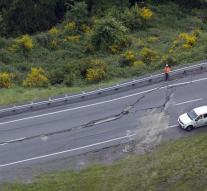 - New Zealand on Monday rocked by a strong aftershock after an earthquake earlier had caused two deaths. The US geological research institute recorded a quake with a magnitude of 6.2.

The epicenter was again near the South Island at a depth of 10 kilometers, about 120 kilometers northeast of Christchurch. The country previously felt several aftershocks.

After the first quake with a magnitude of 7. 9 arose waves of 3 to 5 meters in the night from Sunday to Monday (local time) at several places in the New Zealand coast reached.